COMPETITION TIME: Enter for the chance to WIN one of four Shakespeare Sigma Fishing Kits - Find out more 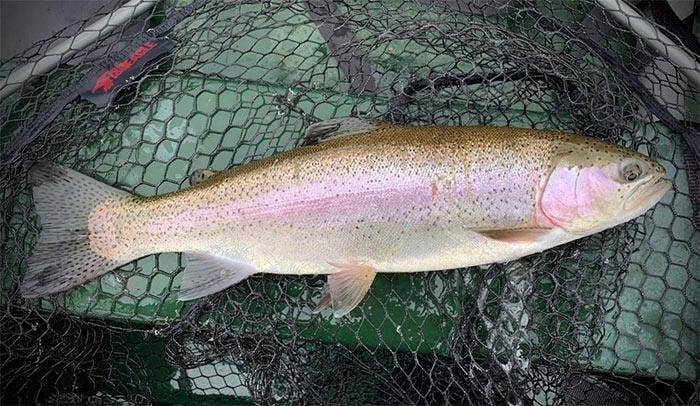 Jonny Muir found some wonderful dry fly action recently, during an all-day rise on the Lake of Menteith. Join him and his boat partner has they adapt to the conditions and enjoy a superb day afloat.

Long-regarded as Scotland’s premier rainbow trout fishery, the 700-acre Lake of Menteith, set in the Loch Lomond & Trossachs National Park, also has to be one of the most picturesque fisheries in the UK, where birds of prey soar overhead and the distant hills and woodlands make for a spectacular backdrop. On a recent outing on the lake, Jonny Muir found some wonderful dry fly action during an all-day rise.

We couldn’t have asked for better trout fishing conditions when we pulled up one Saturday in early June: a warm ambient air temperature, overcast skies and a light breeze of around 5-6mph - perfect for fishing from a drifting boat. As my boat partner and I headed out from the fishery lodge the surface of the lake was rippling perfectly and swifts and martins were working the air immediately above the water - a sure sign of a buzzer hatch. 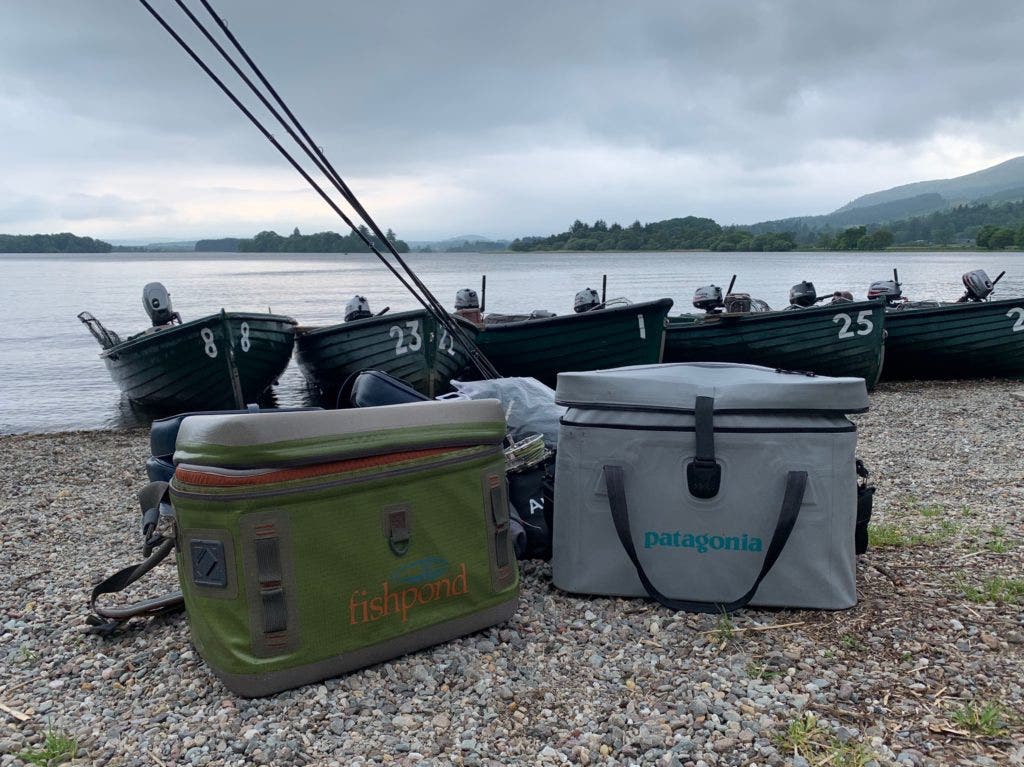 Getting ready to load the boats and head out.


The beauty of the Lake of Menteith is its ideal depth for producing good insect hatches - most areas of the lake are in the 10-12ft range right up to the bank, with some deeper areas in the centre of each bay. The lake has bays galore too, plenty of places to drift into a shoreline and fish over a steadily shallowing gradient, ideal places to intercept feeding trout.

First thing in the morning, with the odd fish showing near the surface but none in great numbers, we decided to fish two different methods to try to locate fish. We deduced they were probably not too far down, given the favourable conditions and signs of buzzer activity, but nonetheless set up with two slightly different approaches.

I rigged up my brand new RIO InTouch Midge Tip Long fly line, its first outing, with a 15ft leader and a 3-fly ‘washing line’ team: coral booby on the point, diawl bach in the middle, and a black cruncher on the top dropper. The thinking was that the 6ft midge tip would just hang the nymphs a couple of feet down and the booby would pop up on the surface, its bright colouration acting as an attractor.

My partner set up with a full floating line with a 15ft leader and another 3-fly team: 2 black buzzers and a popper hopper on the point. Again, this was a ‘washing line’ team but these flies would be fishing just a few inches under the surface, a little higher than my team.

On our first drift, the first fish fell the coral booby, coming out of nowhere to smash it off the surface, a really exciting take! Were the fish right up on the surface or did that fish simply see the bright colour and come up to have a go? We continued with the drift to see what else would happen... 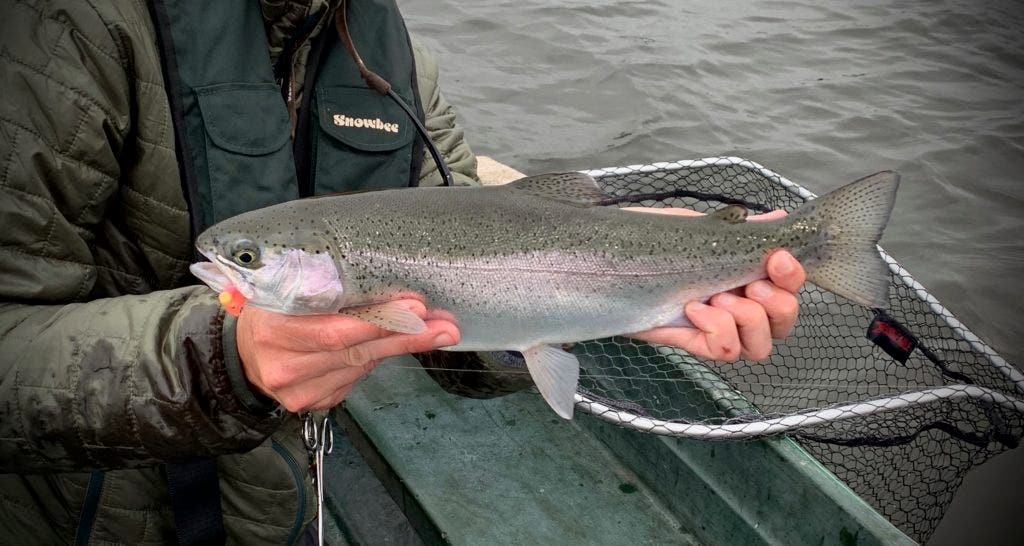 The first fish fell to a booby


We picked up a couple more fish between us as we drifted towards the shoreline, both coming on the nymphs - one on a buzzer and one to the cruncher. We were getting plenty of tugs and lost a couple of fish too, but the critical thing was that my partner, on the full floating fly line, was getting the lion’s share of the action - time to switch over to the full floating RIO Gold and set up for the next drift…

By the time we had motored back up to re-set the drift, there was considerably more action near the surface. Fish were clearly rising in the water column and sipping insects from, or just below, the surface. By now we were both on full floating lines with popper hopper point flies and buzzer/diawl bach droppers. In overcast conditions like these, keep your eyes peeled for the subtle signs of fish cruising just below the surface. Sometimes you’ll be lucky enough to see an open mouth or a dorsal fin, but other times it will just be ‘nervous water’ that gives a fishes position away. I can’t stress enough how important a good pair of polarised sunglasses are to help you look for these signs, and there is nothing better for these conditions than Costa’s Sunrise Silver Mirror lens - a yellow-tinted lens which is simply unbeatable in overcast conditions. Get yourself a pair, you won’t regret it!

I had barely cut the engine and set the drogue before my partner was into a fish on his first cast, taken on the popper hopper point fly. After netting the fish for him and releasing it, he landed another fish on the next cast, and another on the third - all before I had even flicked my leader into the water! Each fish came to the hopper and that was evidence enough that fish were hard on the dries and looking up for a meal -  game on! 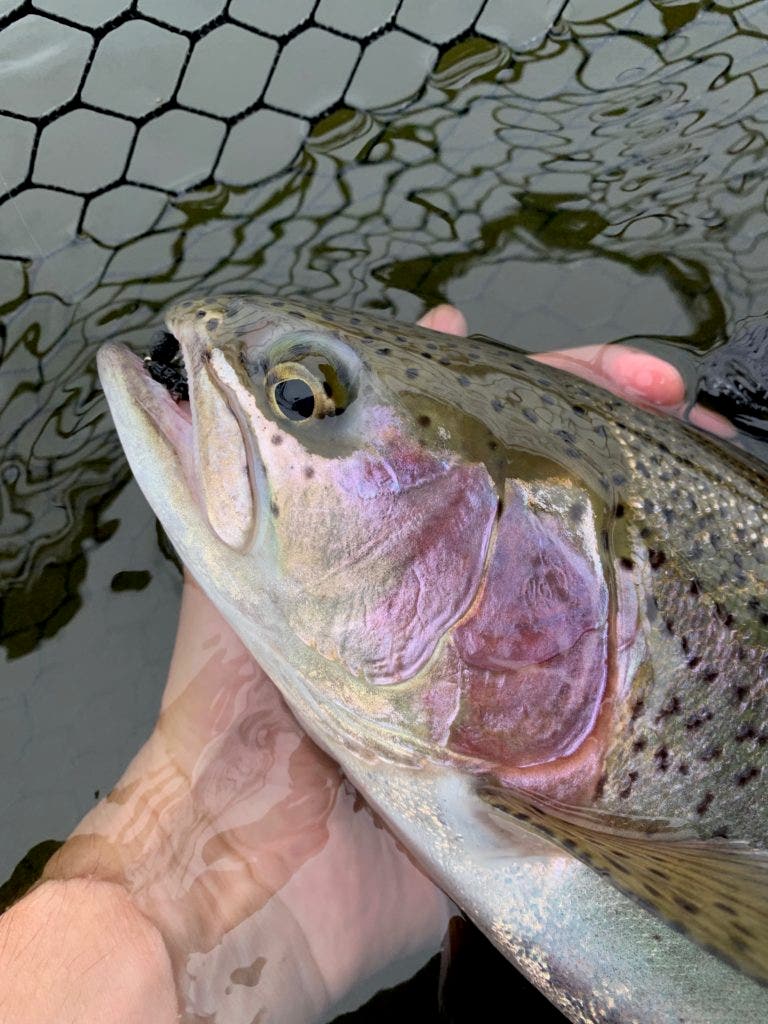 Another rainbow falls to the popper hopper


What happened next was a day of non-stop action, truly a dream day of trout fishing. We persevered with the 3-fly teams and steadily took fish throughout the day but nearly all of the fish were coming to the dries. It was time to simplify…

It’s tempting to persevere with a team of flies, after all, more flies in the water = more chance of a fish… or does it?

My boat partner, being the purist he is, decided fairly early on to switch from a 10ft 7wt and 3-fly team, down to a 10ft 6wt and single dry hopper. With 12ft of RIO Powerflex copolymer leader and a single fly, he was nailing the fish quicker than I was, despite my having more flies in the water - the 6wt proving to be an ideal dry fly rod. Perhaps the copolymer was allowing his fly to sit higher in the water, whereas my fluorocarbon leader and nymphs were just dragging my hopper a little far under the surface? It seemed like sound reasoning, so I switched over to a single fly cast and tried to play catch up…

This was the next big take-away from the day -  don’t over complicate things unnecessarily, and give the fish what they want. A highly buoyant, single dry fly was by far the most effective method on the day, not to mention being the most fun! As soon as the flies started a get a bit waterlogged, a quick shake in a bottle of Dry Shake got them sitting high and dry again and that presentation was what the fish were zoned-in on.

Do consider getting yourself a 10ft 6wt as a big-water dry fly rod too, it has a slight edge over our usual 7wts in terms of delicacy and a little more ‘give’ when lifting into a fish. Going slightly lighter is also great fun, pure and simple. 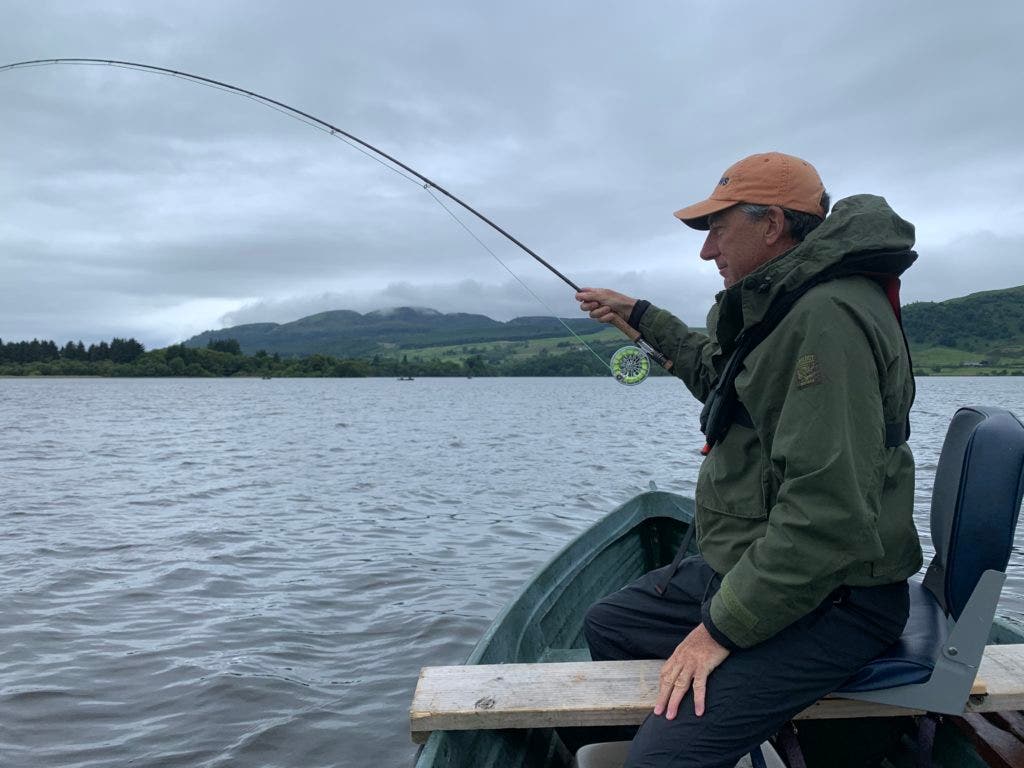 Being decisive with your fishing methods and boat positioning will help you hugely. No one likes wasting their time, and sticking with an unproductive method for too long or staying in an unproductive location will hamper your catch rate. Be decisive and move.

We found that we were drifting through good shoals of fish that were visibly feeding on the surface, but as soon as we had drifted too far past them, we pulled in the drogue, motored back around and re-set to drift through them again. It’s slightly more of an inconvenience to keep making short drifts, but if you have found a patch of fish it’s well worth the effort to quickly move and have another go at them. This tactic really helped us on the day and we certainly wouldn’t have boated as many fish had we not acted decisively - another good lesson learned! 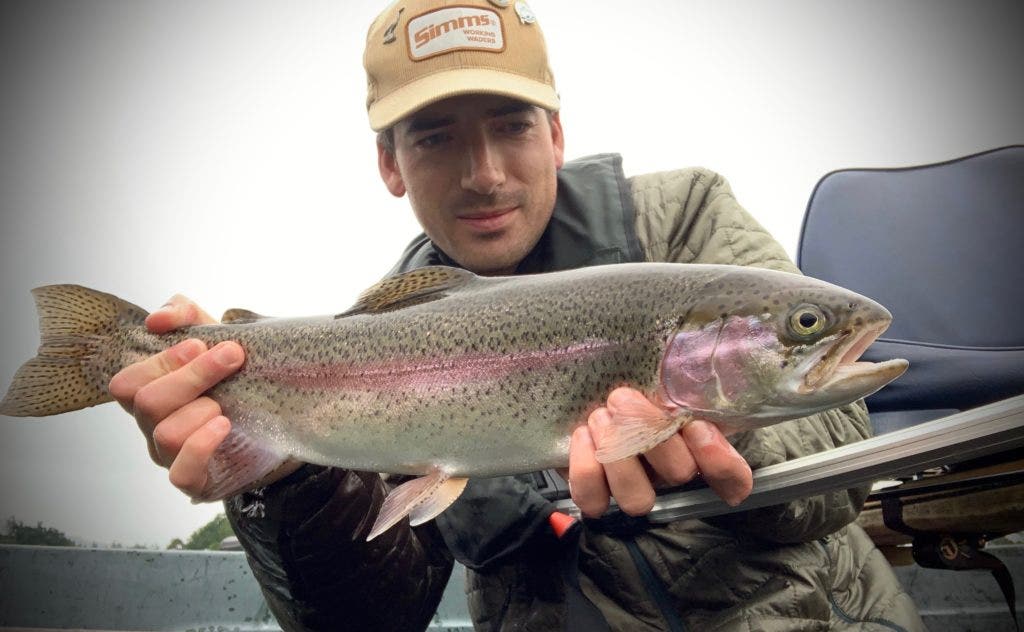 We acted decisively, and caught a lot of fish as a result


Many boats had an exceptional day on the lake that day, with our own boat and others recording over 20 fish, and some boats over 30. Remember It’s not all a numbers game though, but these bumper days are well worth enjoying when they come around!

We headed back to the lodge having had a cracking day’s dry fly sport, saw an osprey wrestle a trout from the water right in front of us, and most of all enjoyed the lake’s wonderful wildlife and scenery.

Can you ask for a better day of trouting? The answer is no! 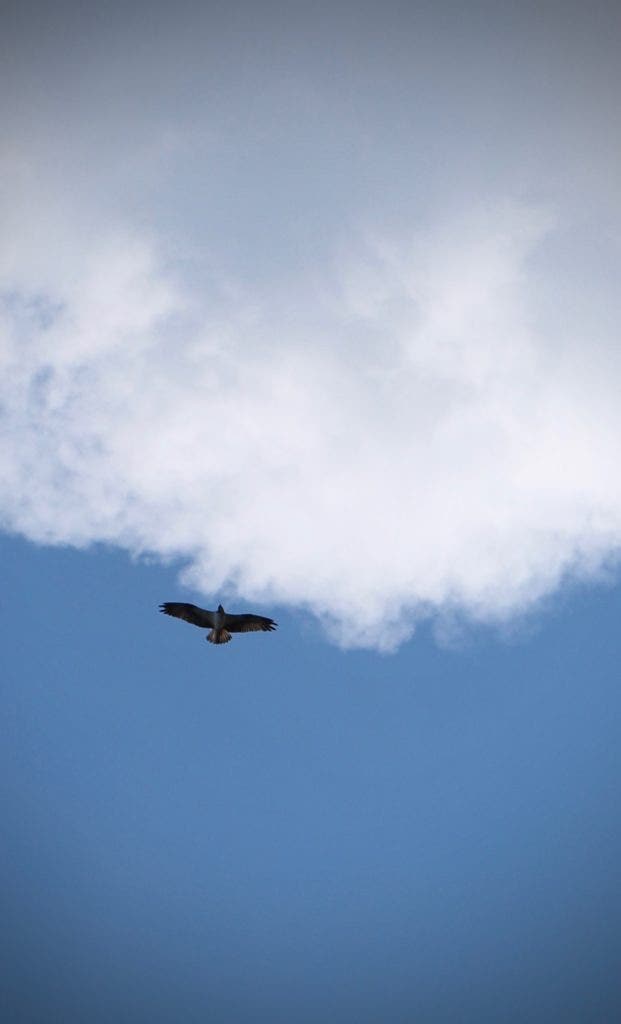 1 year ago
Did you like this post?
0
0
Comments
essayshark
Hello, yup this paragraph is really good and I have learned lot of things from it regarding blogging. thanks.
Reply
Leave your comment
Search The Blog
Categories