Big Game Fishing in the Land of the Red Dragon 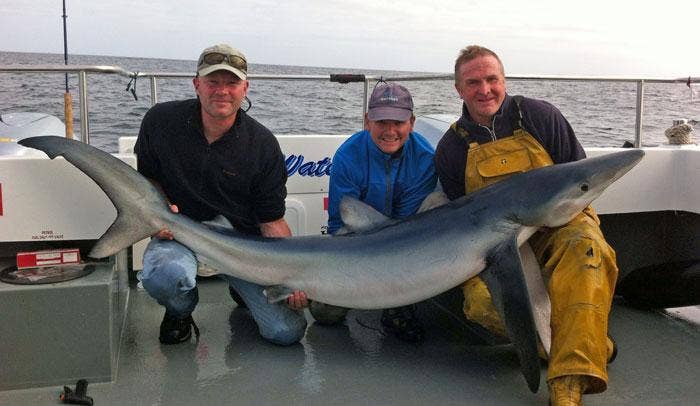 Big Game Fishing in the Land of the Red Dragon

For most people blue water fishing for big game fish conjures up images of leaping marlin in an exotic tropical setting. They will be very surprised to hear a taste of this fishing is available right here in the UK and now is the peak time. Thirty miles off the West Welsh coast there is a very special area of the St George’s Channel known as the Celtic deeps – it’s slightly closer to Ireland than Wales.

It is here the seabed drops away to over 400’ deep and this area is home to thousands of dolphins, many whales (minkies, fin whales and orcas), sharks, plus a host of other fish species including pelagic fish like tuna which gather to fatten up on many hundreds of tons of baitfish that accumulate in this area. 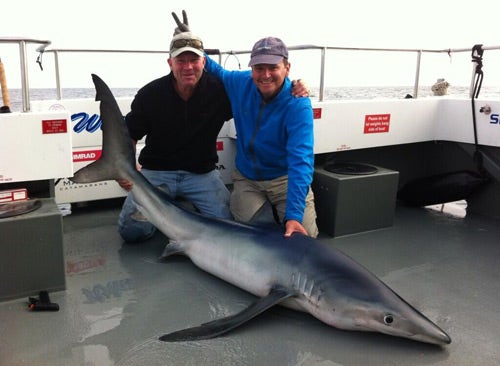 
Our main targets are the many sharks that gather. They are predominantly blue sharks however porbeagles and makos are always an exciting possibility! There's also another part to this story... we have once encountered a very large shark that was at least 15’ long of an unspecified species that we suspect was a great white (due to the flash of white we spotted as it took off), entirely possible in this very productive area.


We fish with top UK shark skipper Andrew Alsop, Andrew has taken a great deal of time and effort learning how to get the best from this unique fishery. He landed 88 blue sharks on his boat in a day earlier this month and will end this season with over 1000 sharks landed and returned. Most current records to do with sharks caught in Wales have been landed on his fabulous boat ‘Whitewater’. He also landed a mako shark earlier this summer for his customer Andy Griffith – a Welsh record and the first caught by an angler in UK waters for over 40 years. 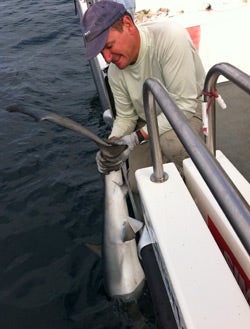 
My friends and I started as bait fishers a few years back but have now progressed to fishing exclusively with fly fishing tackle. Because of the extreme depths and the size of the sharks conventional fly fishing styles are out of the question. We rely on 14 wt Sage Xi3 fly rods – they are 8’ long and have lots of lifting power, high quality fly reels such as the Nautilus Monster and Rio Leviathan fly lines with an extra strong core. Everything is as strong as is can reasonably be as we like to land and unhook the fish we catch. Our traces are constructed from around 12’ of multi-strand wire of 275lb bs with a short bite tippet of 400lb wire. Some blue sharks will roll themselves up in the leader and if a non wire leader gets anywhere near the teeth the fish will cut itself off. The first one I hooked cut me off with its tail on an unstoppable dive to the bottom when its tail touched a 150lb mono trace. The skin is rough and will slice through nylon just like the teeth. With this in mind you can’t cast as such but you must change your mindset to enjoying fighting a string of 100lb fish on your day out. I would feel bad about leaving hooks and traces attached to sharks just so I could stick to a purist ideal. Using a range of saltwater fly lines to fish alternative depths there can be subtle differences to presentation that make all the difference to your catches. With regard to flies we tend to use tube flies as they move up the line away from the fish you are playing to prevent the shark from chewing on the dressing while you are fighting the fish. Here’s the hard bit, if you want to catch lots of blue sharks, hooks need to be baited or dipped in the chum bucket. That is the long and short of it – if it bothers you I suggest you stick to stockie rainbows! 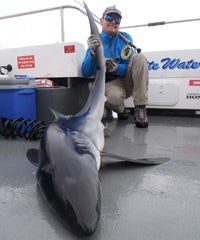 
We have had some epic battles with these fish – they are stronger than you are and tough tackle is needed to tame them. They can easily take line against the maximum drag offered by most fly reels and you will not win every battle. Most will run 100-200yds when hooked at high speed. All my friends look cheerful when battling these fish even when their arms are aching – it really is a lot of fun. The biggest shark we have landed so far is a 178lb blue caught by my friend Duncan – the biggest fish ever landed in the UK on fly tackle and our best day is 44 sharks landed by 4 anglers. Our next target is a porbeagle – this is my current dream fish.

If you would like to try this yourself you can contact Andrew via his website www.whitewatercharters.co.uk I warn you he is very busy for obvious reasons and getting a day can be tricky.

If you’ve been on a shark fishing trip, or wish to ask a question, please leave your comments below – it’s great to share & chat! You can also share with all your friends via our social sharing buttons below.
8 years ago
Did you like this post?
0
0
Comments
Leave your comment
Search The Blog
Categories