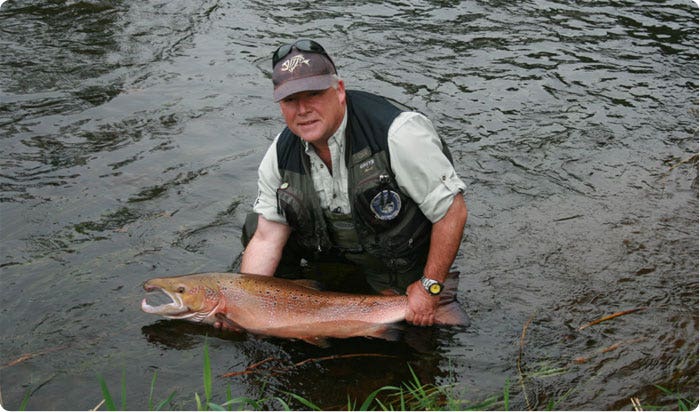 The river Suir (in Irish, Abhainn na Siúire) enters the sea near Waterford, after flowing 114 miles and draining a catchment of 1,394 square miles. Its source is on the slopes of Devil's Bit Mountain, north of Templemore in County Tipperary. From here it flows south through Loughmore, Thurles, Holycross, Golden and Knockgraffon, merging with the river Aherlow at Kilmoyler and further on with the Tar. At the Comeragh Mountains it turns east, forming the border between County Waterford and Tipperary.  It then passes through Cahir, Clonmel and Carrick-on-Suir before reaching Waterford. Here it joins with rivers Barrow and Nore to form a wide navigable estuary. With the Nore and Barrow, the river is one of the trio known as ‘The Three Sisters.’

Geologically, with the exception of a short section in its head waters the Suir flows almost entirely over limestone. Its tributaries also flow over limestone, with the exception of the Nire, the Clodiagh and the upper reaches of the Multeen, which comes in from the west near Cashel. Due to this, the upper river has been likened in nature and character, to the famous English chalk stream, the river Test.

The river and surrounding countryside have an affluent, gentle feel. The rolling hills with rich arable farmland are reminiscent of the Scottish river Tay. It is a prime example of the sort of area that gives rise to the saying ‘fat cattle, fat trout.’

Limestone produces alkaline water, providing high levels of nutrients that lead to good weed growth. This in turn supports large numbers of invertebrates. As invertebrates are a trout’s preferred diet, the combination of plentiful food with large areas of relatively shallow glides make the Suir ideal for the production of Brown trout.  Combined with low level predation this gives a massive recruitment of young trout from the extensive system of tributaries. Only a handful of rivers in Ireland can compare in terms of numbers of trout produced per square metre. The trout survive and grow in what can be seen as a near-perfect environment.  This has led to the Suir being one of Ireland’s premier brown trout rivers. Trout range on average from ¾ to 2 lb; however, larger specimens are regularly seen and occasionally caught.

The Suir has prolific fly hatches throughout the season (1st March to 30th September). From the dry fly fisherman’s point of view the trout respond well to these hatches, being ‘free rising’ in nature. The first key hatches of the season are from March to late April, large dark olives. April to mid-May sees the appearance of medium olives, iron blues and stoneflies. Warming conditions from mid-May to mid-June give hatches of alders, medium olives, reed smuts, midges, mayfly, pale wateries, blue-winged olives, caenis, hawthorn, black gnat, yellow stoneflies and various sedges, (including murroughs and grey flag). These prolific hatches produce the cream of the trout fishing during the day.  June to the end of July sees blue-winged olives, pale wateries and pale evening duns, small dark olives and sedges (including murroughs, cinnamon, red and silverhorns). These hatches can give exceptional evening rises that can continue into September.

Also in September the blue-winged olive can be important in the evening; Sedges with both black and green midges by day.

In times past the Suir had a great reputation for salmon, both in number and size. The Suir with the Erne, Boyne and Shannon was one of the Irish rivers that produced very large salmon on a regular basis.  The river still boasts the Irish rod record, a 57 lb salmon caught on fly in 1874. Michael Maher, a well known Suir ghillie was fishing on the ‘Longfield water’ when he saw the huge salmon in a well known lie. He felt his best chance to catch the fish was on fly. Not having his flies with him he went to a nearby cottage and borrowed materials to make one. With his freshly tied yellow creation he returned to the river and caught the huge fish.  Michaels ‘ad hoc fly’ was named ‘The Mystery’ it subsequently gained a reputation as an effective fish taker.

For several seasons I had been told that if I wanted to catch a large Irish salmon my best bet was either the Nore or Suir toward the end of the season.   The best of the Suir salmon fishing extends downstream from Ardfinnan to Carrick-on-Suir. The fishing is controlled mainly by angling clubs and syndicates. The river produces the occasional ‘Springer,’ gets a good run of grilse from June onwards and has an autumn run including fish in the 12 – 18 lb bracket.  Due to improving runs over the past few seasons this year anglers are able to take salmon. Until August the 14th the river remains ‘catch and release.’ But from August the 15th those in possession of a brown tag will be able to take a salmon if they wish. Brown gill tags (available from IFI Clonmel) are required in addition to the blue gill tags.

My first cast on the Suir was early last September. I had planned 3 days fishing on the ‘Kilsheelin beat’ (below Clonmel). As the fishing had been booked months ahead, I was like all anglers at the mercy of the conditions. When I turned up Philip (the fishery owner) told me the river was the lowest anyone could remember, ‘the fly’ was not worth using.

So for the first time in a few seasons I reacquainted myself with other methods. First cast, a 5 lb grilse welcomed me to the river. Though trying the fly at both first and last light, all the salmon I caught were on alternative methods. Surprisingly even though the river was low, the fish were all fresh.

The long awaited rain started on my last days fishing. Unfortunately work called and it was two weeks before I could get back.  On my first visit, the Suir had been generous with its fish though none had come to the fly. Within half an hour of starting my second visit, whilst fishing a fly down the ‘Castle run’ I felt a very gentle draw and lifted into a fish. Any size?  Just a wee one I responded!

The fish quietly swam up river, the calm before the storm. After some initial wallowing around the fish decided to change gear. Turning downriver it ran about 90 metres. During the run, a huge ‘spade sized’ tail broke the surface, I significantly upped my estimate of its size.

Single, barbless flies were required on the Suir last season. Such a fly being my sole attachment to a very large salmon screamed at me in my head. With no barb, I was concerned the longer I played the fish the more likely it was to come off.  The fish then moved mid channel and refused to be bullied. Clearly a large fish it put me through an emotional roller coaster. After some 20 minutes it finally and grudgingly came to the net.  Ironically even though I had been concerned about the hook hold, I had to use forceps to get the fly out.  Weighed and photographed, then released.

In the net, the scales stopped at 25 lbs. An hour later, as the adrenalin pumping around my body came down to normal levels, I remembered to take the weight of the net off the total. It slightly shrank to 23 ½ lbs. This solid, red, cock fish for me was a fishing milestone, my first salmon over 20 lbs.

I fished on for the rest of the day in a half hearted manner. During the afternoon an even larger fish was pointed out to me further down the beat. Though I threw a variety of flies at this fish, it sensibly kept its head down.

The following day three of us fished down the lower part of the beat below the ‘Castle run.’ A perfect fishing day, warm, overcast with fresh fish around. Some salmon were moving, as well as some large brown trout rising to a hatch of Olives. If I had my trout tackle I would have been tempted to drift a fly over them.

Both of my companions took sea liced fish. I also got another coloured salmon, nowhere near the proportions of the previous day’s fish.  The Suir has proven to be a generous river to me, at present giving me more than a fish a day. This season I have already booked to fish the river again for salmon. But before that, I think I will try for one of the big brownies.

Compare Products
Compare
Clear All
You have no items to compare.