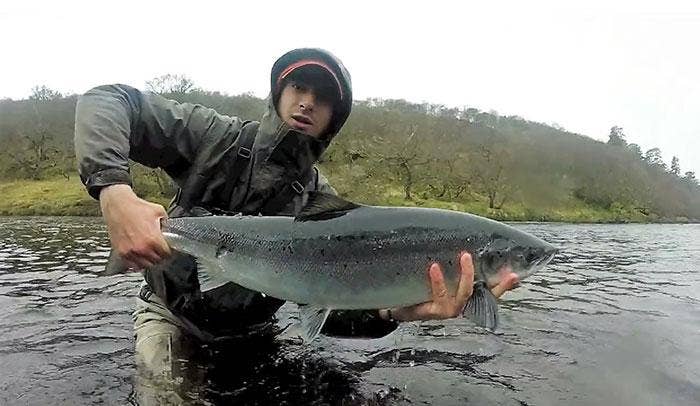 Jonny Muir looks ahead to the new salmon season and offers some timely early season advice.

The 2019 salmon fishing season has officially started with the opening of the January rivers: the Helmsdale, Thurso, Naver and other northern systems, as well as the River Tay and Tummel. After a 2018 season that most of us would like to forget it was hugely encouraging to see an opening day springer landed on the Portnacraig Pitlochry beat of the Tummel, a fine specimen of 16lb in addition to another fish caught in the Tay itself, a 14-pounder from Stobhall. A few days later came another first fish from the Naver, giving us all hope for a good spring run. It is of course far too early to predict the season ahead, but it’s certainly a much-needed confidence boost to see fresh fish caught in the first week of the season! 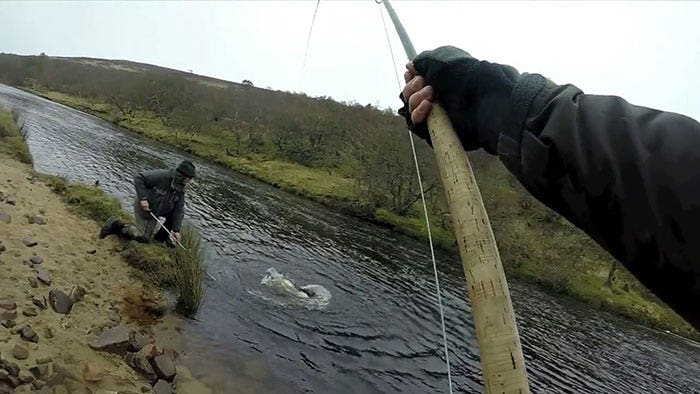 We had it tough, there’s no doubt about it! A brutally cold spring gave way to a seemingly never-ending heatwave and that made for some of the toughest salmon fishing conditions imaginable. Add to that the poor runs of fish throughout most of the year, whether a result of prolonged low-water conditions or some other cause, you’ve got a season that most of us won’t look back fondly upon.

Towards the end of the season, however, there were some signs of encouragement with fresh fish creeping into our rivers as the rains returned in September and catches on some systems improved just before the final whistle. The Ness District Salmon Fishery Board who have been documenting spawning salmon with underwater cameras for the past few seasons have been recording healthy numbers of fish cutting redds throughout the winter, and an increase in the amount of redds recorded in some areas. We mustn’t get our hopes up of course but these signs are certainly encouraging. Perhaps the drought caused fish to run late and we simply missed a lot of them? Who knows?

Your Guide to the 2019 Salmon Season

Now it’s time to tackle up for 2019 and make this season one for the books.

If you’re heading out early-doors there are two important things to bear in mind; the way you search for fish and how to protect yourself from the elements. Plus you can find our full list of recommended salmon fishing tackle and clothing online.

Searching for a Springer

It’s fair to say that, in January and February, our rivers are not exactly stuffed with fish! With the exception of kelts which can provide a much-needed tug on the line, any fresh ‘new’ fish are going to take some finding. An important first step in locating a springer is to identify the presence of temperature barriers. When deciding where to fish, consider whether it’s likely that fish will have ascended barriers such as waterfalls and weirs this early in the season. It’s true that springers run hard and the upper beats on many rivers fair best in the spring, but it’s unlikely that fish will navigate serious obstacles at this stage in the game. Look for mini-obstacles at your chosen fishing location too: rapids, shallow bars and small weirs. Concentrate your efforts below these features where you feel a lone fish may have stopped for a breather.

Given the low probability of a group of fish resting in one lie, early season salmon fishing calls for a mobile approach - cast and move, cast and move. You’re looking for the perfect moment when your fly catches the eye of a passing fish, where the morsel simply looks too good to miss. This mobile approach calls for tackle and flies that maximise our chances of catching attention.

Interchangeable salmon fly line and tip systems are king in the early part of the season, enabling us to explore different depths where fish may be running. It pays to remember that the top layer of water is often the coldest, making fish reluctant to rise to a fly if it means leaving the more comfortable layer that they are travelling in. Lines such as the RIO Scandi VersiTip with interchangeable 15ft sink tips help you get your fly into the zone without the need for a full-sinking line and are a great choice for medium-sized rivers. If you find yourself on a larger river such as the Tay, with a powerful current and greater depth, triple density shooting heads are the way forward. Guideline’s Power Taper 3D+, Hardy’s Scandi Rocket Shooting Head and Tip Set, MacKenzie’s G3 Phased Density 5 and RIO’s Scandi 3D are all designed to allow you to experiment with different depths and keep your fly swinging through a specific layer of water. You’ll have to tailor your approach to the conditions and water levels on the day, but I wouldn’t go spring fishing without a good selection of tips and heads in my tackle bag. 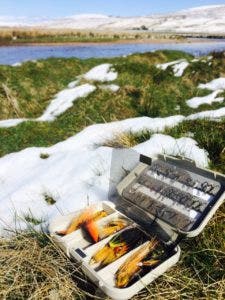 Given that we’re most likely on the hunt for a single fish, I like to use something pretty darn eye catching, whether that means size, shape or colour. Weighted tubes and coneheads will help you achieve depth and a steady swing-speed if the water is racing through at speed. Classics such as the Willie Gunn and Cascade should always be in your box, as should the Posh Tosh – a tasty combination of black and yellow that is a firm spring favourite on many rivers.

One of the advantages of using sinking tips and multiple-density heads is that we can use lightweight flies with lots of tantalising movement, whilst still achieving the desired presentation and depth. Try a short leader of no more than four or five feet with a plastic or aluminium Sunray Shadow and retrieve it through the mid-water taking zone. This is a great way of quickly covering water and should appeal to the aggressive nature of early fish.

There are no hard and fast rules, but keeping your fly down in the water, controlling its speed with line choice and mending, maintaining plenty of movement in the fly and covering as much water as possible is probably as good an approach as any!

Any time spent warming yourself in the fishing hut or huddled in front of your car heater means valuable fishing time lost! Remember, we’re hunting for a lone fish and we really need to maximise the time our fly spends swimming – you never know when that 20-pound sea-licer has just entered the pool.

Staying warm and dry is so important and failure to do so can really wreck a fishing day. Dress in layers and work from the bottom up, starting with good merino wool or synthetic base layers, followed by fleece layers for both top and bottom. Patagonia’s Capilene and R1 ranges are perfectly suited to the task. On top of your fleece layer I like to put on a synthetic insulated jacket such as the Patagonia Nano Puff before climbing into my waders and covering everything up with a Gore-Tex wading jacket. Don’t forget your extremities either – fleece lined gloves make a hell of a difference to your comfort and enjoyment, as does a warm hat and buff. 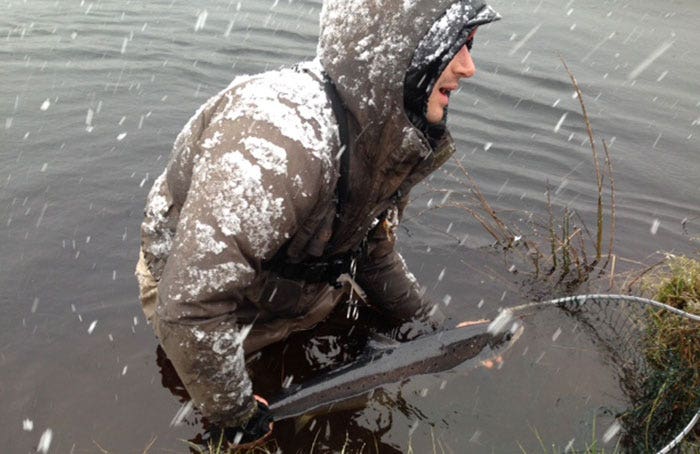 
Last season taught us that there are many things we can’t control, most notably the weather! For me, part of the allure of salmon fishing is that it never can be predicted, no matter what the forecast says or what you hear from the ‘word on the street’. One thing is certain though – a gleaming chrome-fresh spring Atlantic salmon is one of the ultimate prizes in all of fly fishing. I’ll be out there again this year casting a line and rolling the dice, waiting for that reel to sing…

3 years ago
Did you like this post?
0
0
Comments
Brian Mack
The country side looks very nice! And a well written article. We also love all the Rio products and simply won't use anything else. They work fantastic for our Salmon & Steelhead rivers. Best of luck in 2019 to all the fly fishers in Scotland!
Reply
Leave your comment