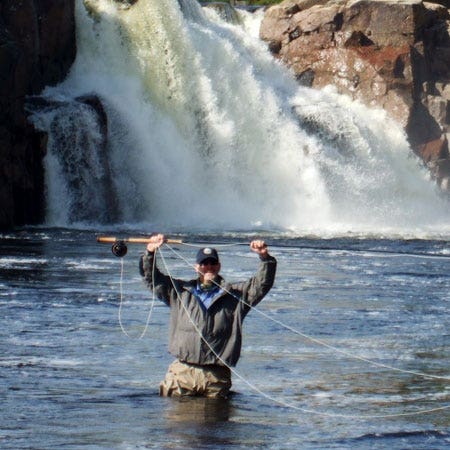 Steve would describe himself as an all-round angler, but he is happiest with a fly rod in my hand. He has been lucky to fish a number of destinations over the years; Cuba, Belize, Australia and Norway to name but a few, however he still has one or two destinations on a to-do list which include the Seychelles, Argentina and Iceland.

Steve salmon fish's weekly for the silver tourist on the River Wye, and still finds time to trout fish on the reservoirs, lakes and rivers.

He has recently hosted trips to the Northern Kola in Russia and has managed to fish an impressive 10 rivers in total.

He has received in-depth training from Simms Europe on Gortex products and wader repair and has had the privilege to spend some time with design guru Mark Farris from Waterworks-Lamson. He attended a training seminar in Norway courtesy of Guideline, using and understanding their products on the River Gaula with members of the Power Team, which included casting lessons from Jan Eric Granbo.

Steve can be contacted at Sportfish Winforton on 01544 322 307 or via steve.hunt@sportfish.co.uk