Chalkstream salmon specialist Paul Bullimore catches his first salmon of the season on a fly.

As I’m sure many of us do I spend the early part of the season waiting eagerly for magical first fish? It brings to an end those long nights thinking about fishing, sorting out tackle, reading about fishing etc. In addition, for many of us, it means we can start to relax a little and enjoy fishing the rest of the season in the happy knowledge that we are ‘off the mark’. It doesn’t matter how many salmon I catch, every one brings back that amazing feeling we get when we feel the take, and I guess that’s why I keep going back for more.

This year my wait was over after only a few trips to the river. I fish on a syndicate on the lower reaches of the Dorset Frome where the fishing doesn’t normally get underway until the after 15th of May when the spinning starts. It’s always worth persevering with the fly and for the last couple of seasons I have taken fish before the spinning gets underway. 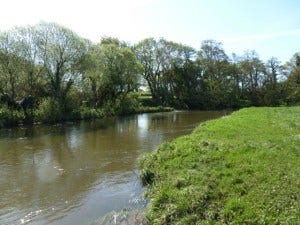 The Dorset Frome at a good height for spring fishing


I arrived at the river at 8am and tackled up in the hut and had a coffee whilst I decided on fly and line options. I went for a fast sinking tip on the RIO Multi-tip in combination with a 1 1/2" Cascade brass tube. At this time of year with the water quite high I use a Hardy Swift MK2 13’ 8# with a Hardy Angel MK2 reel. The added length of the double-hander really helps to control the fly better.

I started at the top of the beat and had a good take at the tail of the first run I fished down. I couldn’t believe my luck when the fly stopped and I felt a good resistance. Very quickly I realised it was a pike of about 6lb. Although a good fight on the 8 weight it was not what I was hoping for.

Once un-hooked I continued to fish downstream, other than a couple of sharp tugs there was no major excitement although the water looked great and at a perfect height for fishing the fly. Once I got below the hut pool I stopped for a quick bit of breakfast then fished through what I thought would be the most promising spot. Unfortunately nothing happened. As I fished through a nice little run leading in to the best sea-trout pool on the beat I had high hopes as this lovely run can sometimes yield a fish.

Just as I got to the tail of the run the fly stopped and I felt that classic jagging on the line. This was clearly a decent fish, it kept deep and ran steadily up the run hugging the bottom, as it passed me I saw a glimpse of a ‘spade of a tail’ as it made its way up to the top of the run. Poppy, my Black Lab, was very excited at this point and was looking at me wondering what my game plan was. 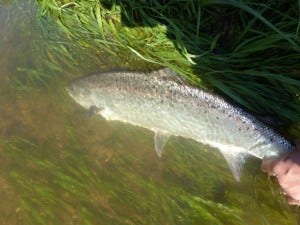 
After a few runs the fish was starting to tire although it was still heading for the open pool above. I had to put the brakes on fairly hard to keep it in the run. Eventually I got the fish under control and managed to get below it. My fish was soon on the surface and the game was over as I lifted a lovely 15lb bar of silver complete with sea lice out to unhook it. 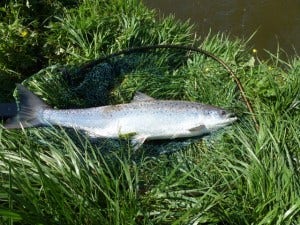 Fish fish of the season on the bank!


A quick couple of pictures later, I got in the river to release the fish. After about 5 minutes it had recovered well and swam off strongly.

I spent the rest of the morning fishing down the rest of the beat but wasn't really concentrating. I was more than happy that I’d just released my first springer of 2012. It was a lovely fish and as always, I was very happy to finally be “off the mark”!